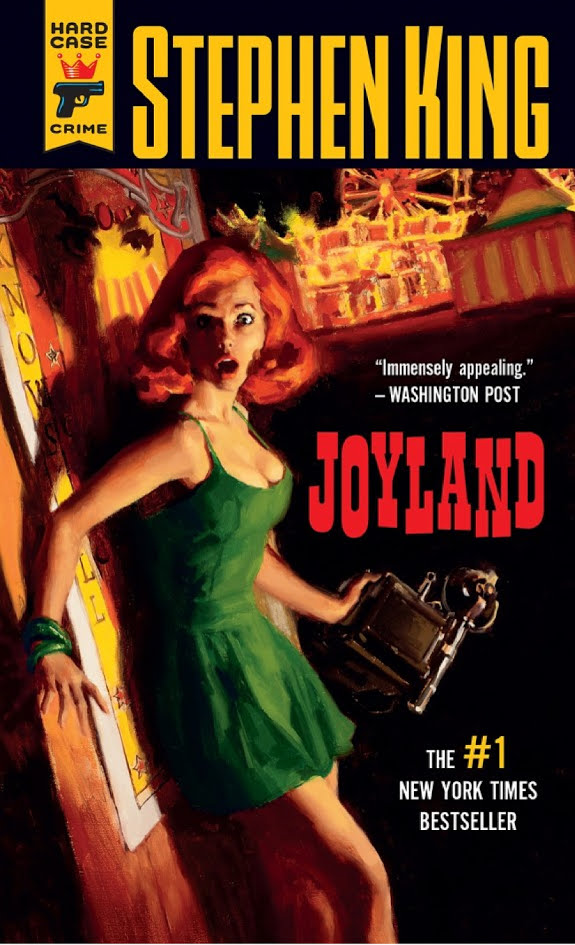 This haunting coming-of-age story (288 pages) was published in June of 2013 by Hard Case Crime. The book takes you to a 1970s beach-side amusement park. Melissa read Joyland and loved it; it wouldn't be on our site if she didn't recommend it.

This novel is both eerie and bittersweet — don’t be frightened by the author’s name on the spine!

Although this story has the ideal elements for a King horror tale — a creepy carny, a haunted ride, a prescient fortune teller, and an unsolved murder — it’s really a heartfelt coming-of-age story. Surprisingly touching, it captures that breathless, aching feeling of summer, the sense of being on the brink of something that changes everything.

Devin, a college student with literary aspirations, takes a summer job at a run-down amusement park along the shore. Looking back as he tells us his story, he reflects that he had a ‘really bad case of the twenty-ones.’

While enduring the humiliation of his role as the costumed Howie the Happy Hound at the park, Devin develops an irresistible fascination with the Funhouse Killer, a mysterious figure who committed a murder four years before and was never brought to justice.

Devin also slowly finds himself becoming part of the community. He befriends a special young boy and his mother, connects with the other carnies, and grows up in ways he could never have anticipated.

This novel represents the best of King’s ability to create characters that feel like real people: vulnerable, flawed, good-intentioned, perhaps a little doomed. The tone is just right — not quite dread, but uneasiness, the way the air feels heavy just before a seething summer storm. You know something is coming, it might be frightening, and there’s nothing you can do about it but wait and hold on to come out the other side.

When you’re twenty-one, life is a roadmap. It’s only when you get to twenty-five or so that you begin to suspect you’ve been looking at the map upside down, and not until you’re forty are you entirely sure. — Stephen King

Every Friday, we share our favorite book- and travel-related links. This week, we've got a stellar bakery in Madrid, pairing tea and classic British novels, a magical dragon boat, the dogs of Kars, Turkey, and more.