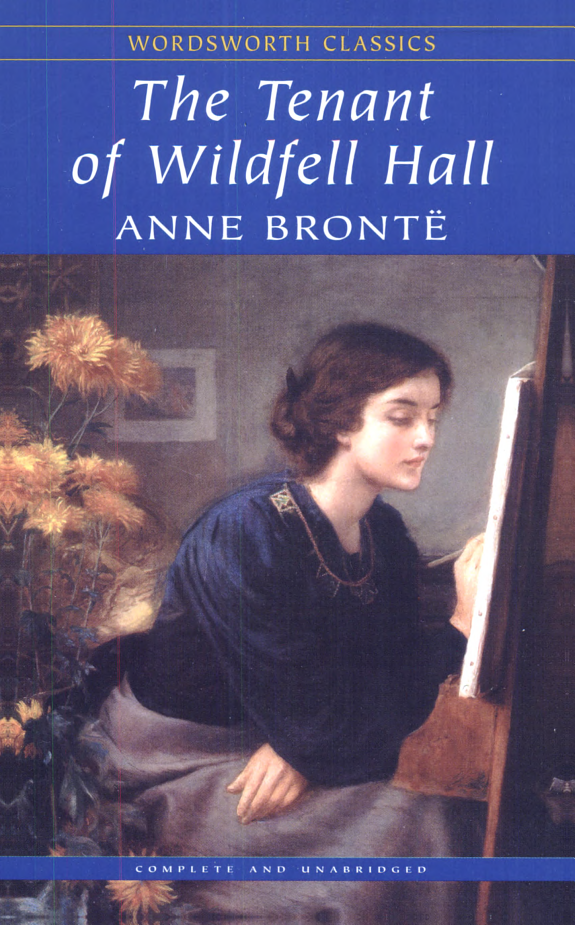 This Victorian classic (394 pages) was published in January of 1970 by Wordsworth Editions. The book takes you to a manor house in England. Melissa read The Tenant of Wildfell Hall and loved it; it wouldn't be on our site if she didn't recommend it.

The Tenant of Wildfell Hall

Anne sometimes seems doomed to be the forgotten Brontë sister, but this novel is essential reading: Most literary critics hail it as one of the first feminist novels.

It also happens to be a rollicking good read.

The story centers on Helen Graham, a woman struggling for independence and a safe, happy life for her son. She is — for reasons that will become abundantly, painfully clear — on the run from a shady past, and she takes up residence in the previously neglected Wildfell Hall.

Helen is a vexing and beguiling riddle to the townspeople, the object of intense curiosity and judgment. She soon becomes a favorite topic for tongue-wagging over tea. Beautiful, but unmarried, distant and laconic, she’s an artist who sells her own paintings to make a living… how dare she?

Unlike Thornfield in Jane Eyre and the titular estate in Wuthering Heights, Wildfell Hall is not haunted by ghosts or memories, but it is damp, unwelcoming, in disarray — a reflection of the town’s attitude toward Helen and Helen’s own state of mind when she arrives. Even the garden has given way to weeds, and a boxwood shrub carved into a swan ‘had lost its neck and half its body.’

The structure of the novel–essentially a long letter broken up with excerpts from a personal diary — gives it a touching intimacy and immediacy. Through the words of a potential suitor and Helen herself, we learn about the bitter events that brought her to Wildfell. Anne Brontë’s writing style is a little more accessible than her sisters’, and much of this novel feels quite modern.

Helen, our struggling heroine, is equal parts 19th-century stick-in-the-mud and badass role model: courageous, honest, determined, and self-contained. She’s a strong lady who is resolute in her pursuit of the life she knows she deserves, and that makes her a timeless heroine.

Near the top of this hill, about two miles from Linden-Car, stood Wildfell Hall, a superannuated mansion of the Elizabethan era, built of dark grey stone, venerable and picturesque to look at, but doubtless, cold and gloomy enough to inhabit, with its thick stone mullions and little latticed panes, its time-eaten air-holes, and its too lonely, too unsheltered situation — only shielded from the war of wind and weather by a group of Scotch firs, themselves half blighted with storms, and looking as stern and gloomy as the Hall itself. — Anne Brontë

Every Friday, we share our favorite book- and travel-related links. This week, we've got sweet Wes Anderson-inspired cafés, Armenian food in LA, the eerie boat-house from 'Rebecca,' easy travel journaling, and more.

Every Friday, we share our favorite book- and travel-related links. This week, we've got essays from Aminatta Forna, walrus sightings, Iranian hotels, a seafaring brooch, a funny homage to Anne Brontë, and more.