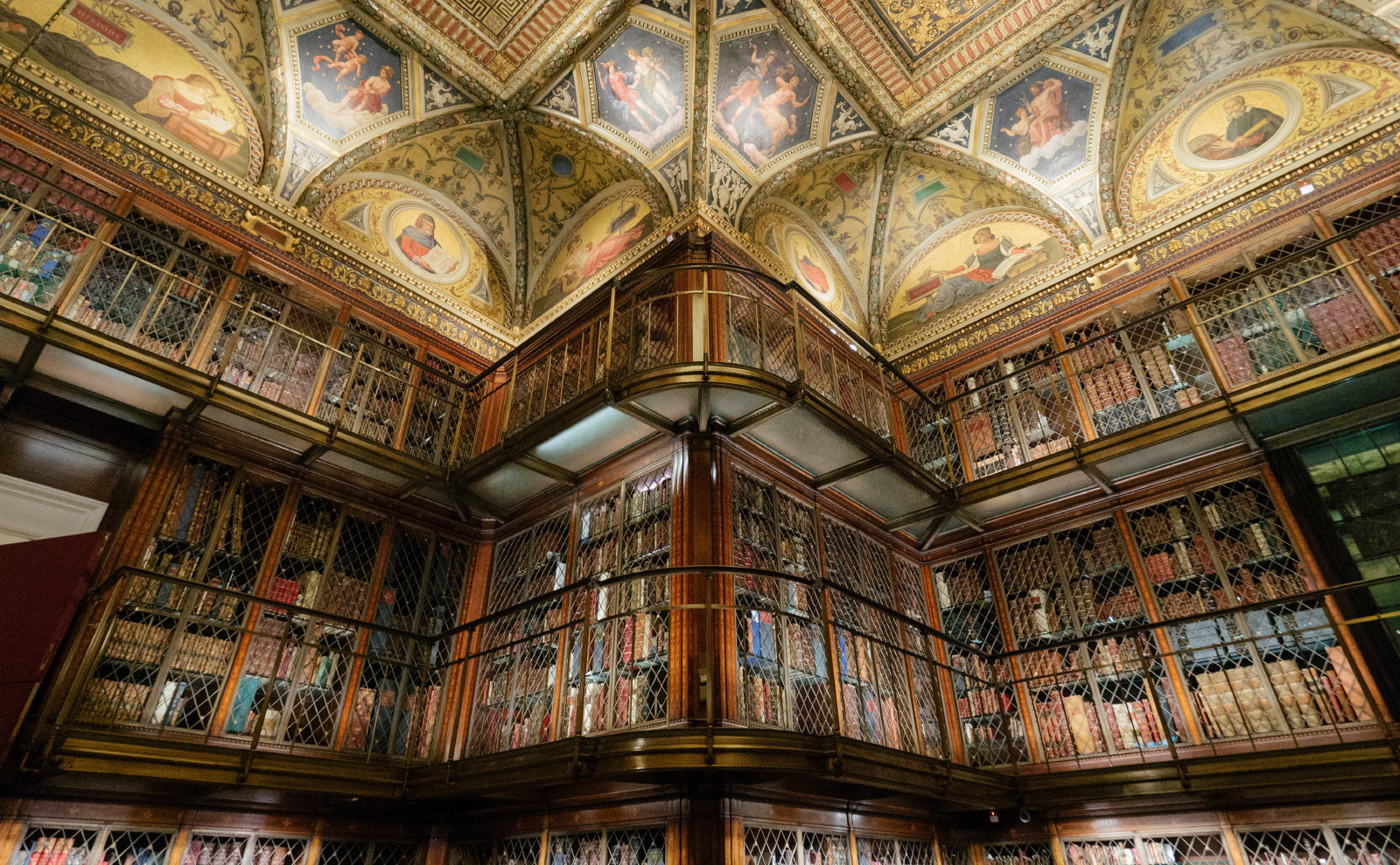 Although this looks like the enchanted library of your dreams, it’s actually the East Room of banker J.P. Morgan’s 1906 Library, the heart of the Morgan Library and Museum in New York City.

John Pierpont Morgan, a.k.a., J.P., was an American financier and banker who crushed it in the industrial consolidation and corporate finance game in America at the turn of the 20th century. But lest you think he’s just another rich white dude, remember this: When he died, his fortune was estimated to be $118 million, and almost half of it was tied up in his collections of art and books. He was a patron of both the American Museum of Natural History and the Metropolitan Museum of Art — and he commissioned photographer Edward S. Curtis to create a series on Native Americans, which eventually became the 20-volume collection The North American Indian.

J.P. also created a remarkable library in the heart of Manhattan. His two-story library is pretty much the platonic ideal for book lovers: golden light, frescoed ceilings, Persian rugs, and floor to ceiling books, including three Gutenberg Bibles and first editions by authors including Charles Dickens, Edgar Allan Poe, Herman Melville, and more. There’s even a collection of classic children’s books.

Admission to the Morgan includes an hour-long tour with a docent, and it’s the best way to begin your time at the library. You’ll get an overview of the building’s history and what’s in the collection, so you can pick out favorite spots or individual books that need more attention from you later.

An excellent audio tour is also part of the admission. The absorbing narratives — from J.P. Morgan’s biographer Jean Strouse, noted architect Samuel White, and Morgan library curators — give you the inside story on more than 30 objects, including the tapestry that covers the east wall. This 16th-century work of art is called The Triumph of Avarice and is part of a series of tapestries that depict the Seven Deadly Sins. It’s inscribed with a Latin phrase that translates to As Tantalus is ever thirsty in the midst of water, so is the miser always desirous of riches. Legend has it that this very tapestry also hung in King Henry VIII’s court.

You might have a seat on the settee in the middle of the room to learn more about the fascinating personal history of the Morgan’s first librarian: Belle da Costa Greene. By all accounts, an exceedingly bright and hardworking young woman, she was just 26 years old when she met J.P and accepted the position of librarian. She was equally known for her curiosity and her fashionable feathered hats: ‘Just because I am a librarian,’ she is said to have quipped, ‘doesn’t mean I have to dress like one.’ In addition to possessing a sharp wit, Greene also had secrets. Though she passed herself off as white, mostly through omission, her father was the first black graduate of Harvard University.

Greene served as the Morgan’s librarian for 43 years and was later appointed the first Director of the library’s Board of Trustees. An expert in illuminated manuscripts, she was a force at auctions and acquired rare manuscripts, books, and art to enhance the collection.

The Morgan has extensive goodies online

The Morgan’s online collection is vast and ideal for falling down rabbit holes of interesting stuff when you need an internet distraction. You can explore the full online collection of drawings and manuscripts here, and the site also offers curated online exhibits with photos, audio, and text.

We particularly like this collection of letters and a diary entry from Charlotte Brontë in which you can see both her handwriting and transcribed text — very helpful for modern eyes. There’s also a nice recap of the previous museum exhibition called Charlotte Bronte: An Independent Spirit.

The Morgan blog is also a delight, highlighting various objects from the collection and providing a behind-the-scenes look at the extreme nerd-dom that goes into understanding and maintaining this kind of collection… like this post on poems typed by Lewis Carroll in the 1800s, and this one on the preservation of a 15th century genealogical scroll.

The Morgan Library & Museum has everything you need for a supremely enjoyable bookish day. It’s open Tuesday through Sunday (closed Mondays, Thanksgiving Day, Christmas Day, and New Year’s Day). A free 1-hour tour of the Library and Museum collections is available Tuesday through Sunday at 12:30 pm. (No reservation required; meet at the Benefactor’s Wall across from the coat check area.)

Be sure to refuel in the airy café in the atrium or enjoy a 2-course Prix-Fixe menu in the original Morgan family dining room. Pro tip: Don’t miss the shop with collectible books and beautiful objects to remember your visit.

Here! This is where we'd like to teleport this afternoon to spend a few hours reading amidst the colorful bookshelves. Located in Rio de Janeiro, Brazil, this library has been impersonating a magical portal since 1837.