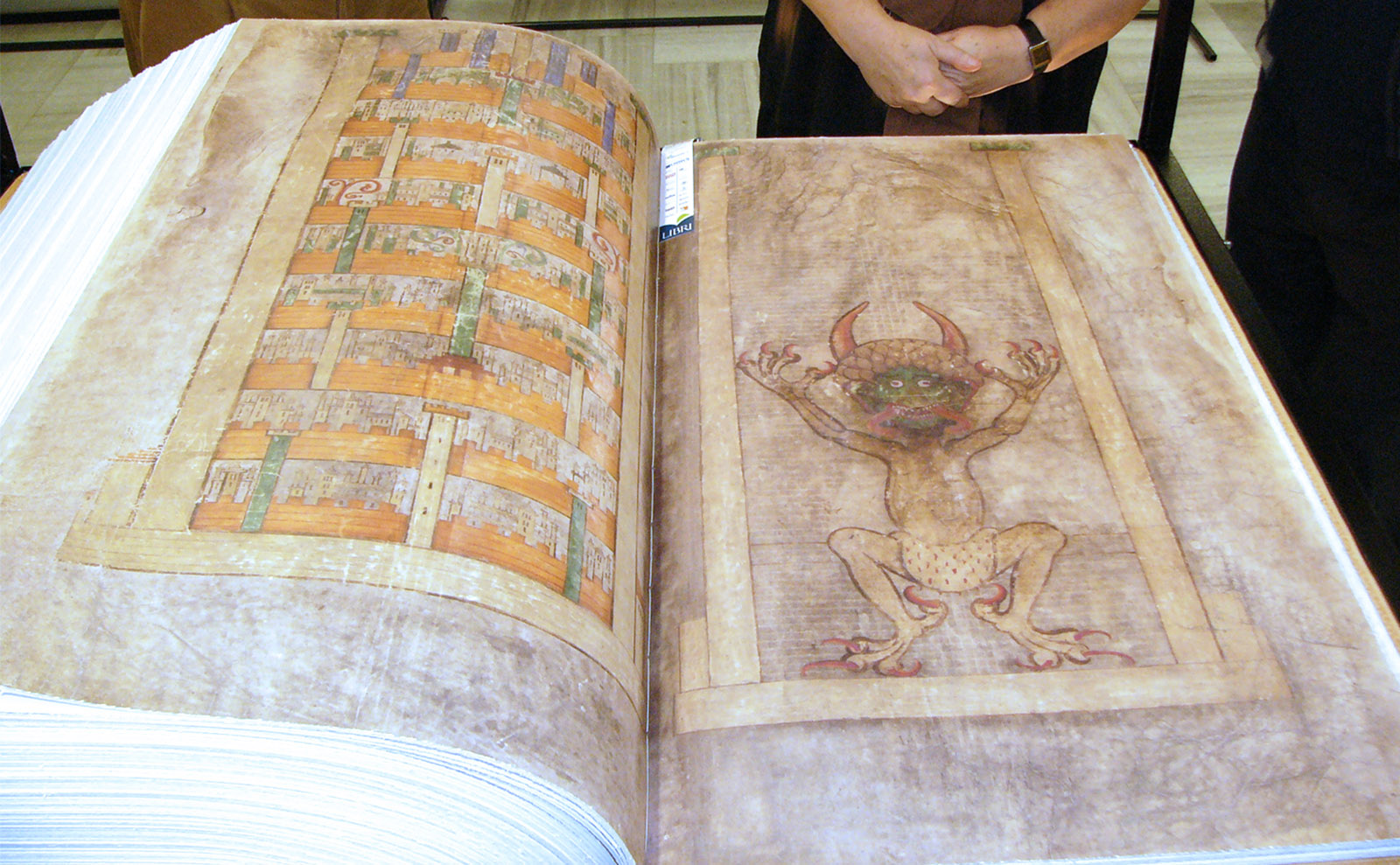 The Codex Gigas — a.k.a., The Devil’s Bible — is the world’s largest preserved manuscript from the Middle Ages. It was created in the thirteenth century, and experts believe all of its 600+ pages were written and illuminated by the hand of one unnamed Benedictine monk.

According to legend, a monk who broke his vows was sentenced to be walled up alive. He begged for clemency and promised to write a book that included all human knowledge — in just one night. At midnight, he realized he would never succeed in his task, so he prayed to the fallen angel Lucifer to help him. The devil delivered, so the monk drew the devil’s portrait on page 577 of his manuscript in gratitude.

In reality, one monk did write the entire book, but it took him approximately 25 to 30 years to complete it. The oversized book was initially kept at a monastery in Bohemia (now the Czech Republic), but was stolen by the Swedes during the Thirty Years’ War and taken to Stockholm as war booty in 1649.

Now the book is housed at the National Library of Sweden. The white leather volume adorned with fancy gewgaws is about three feet tall and weighs a staggering 165 pounds. To protect this 800-year-old book from the damages of air and light, it’s kept in a climate-controlled case.

The book is bound in wooden boards covered with leather. The inside is composed of 310 leaves of vellum that were reportedly made from the skins of 160 donkeys, although they may also be calfskin. Mystery alert: The book originally held 320 sheets, and no one is sure who removed the 10 extra pages or why.

The contents of the book include the complete text of the Old and New Testaments in Latin, as well as incantations, exorcism spells, the Ars medicinae (a 12th-century medical textbook), the Chronicle of the Bohemians, a calendar, and Hebrew, Greek, and Slavic alphabets. Toward the end of the book, there’s a drawing of the kingdom of Heaven with the infamous illustration of the devil on the facing page. 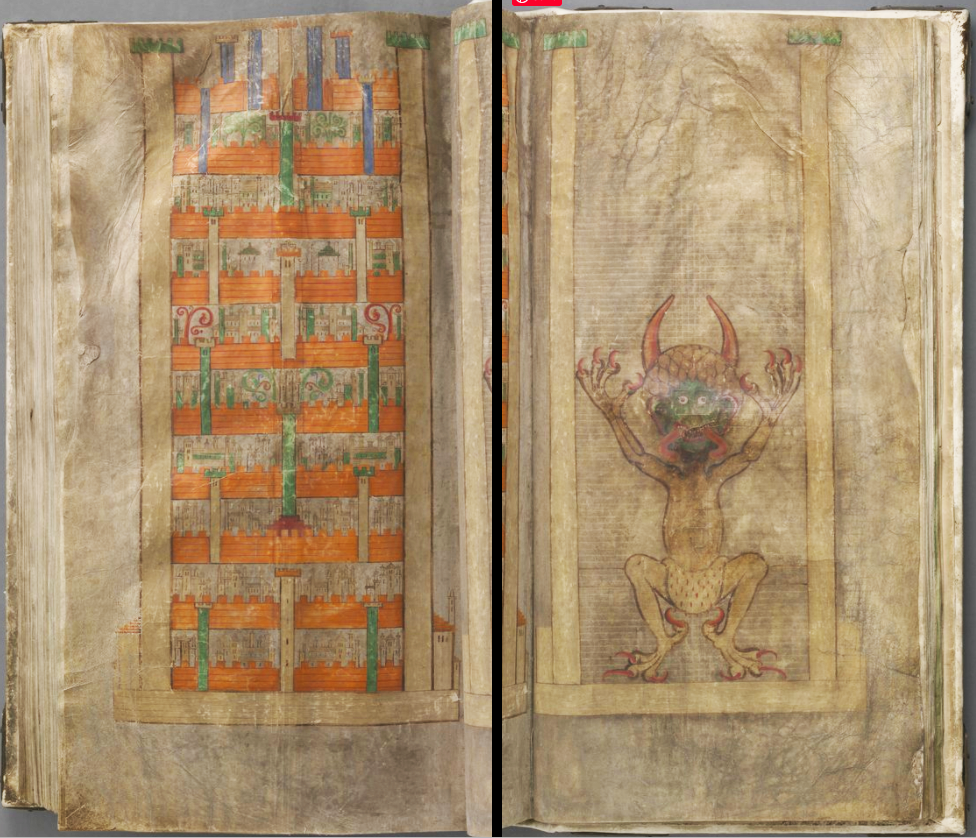 The red, comma-shaped dashes on the devil’s loincloth are thought to be the tails of ermine furs, which were a common symbol of sovereignty at the time. The two long, red tongues poking out of his mouth evoke serpents, i.e., forked tongues, representing dishonesty.

The image of Heavenly Jerusalem comes after the monk’s admission of his own sinfulness. He confesses to his battle against depravity, pride, envy, gluttony, lust, and more. The image of the city is based on an account in the Revelation of John and is meant to show that man has a clear choice between the realm of God or that of Satan. That’s why the devil appears on the very next page. In the text, the monk says that the devil has been ‘captured frozen in the utmost depravity and sin.’

This commingling of the religious and the secular may seem strange to modern eyes, but it was quite normal until about the 1700s, when the biblical canon became more finalized. 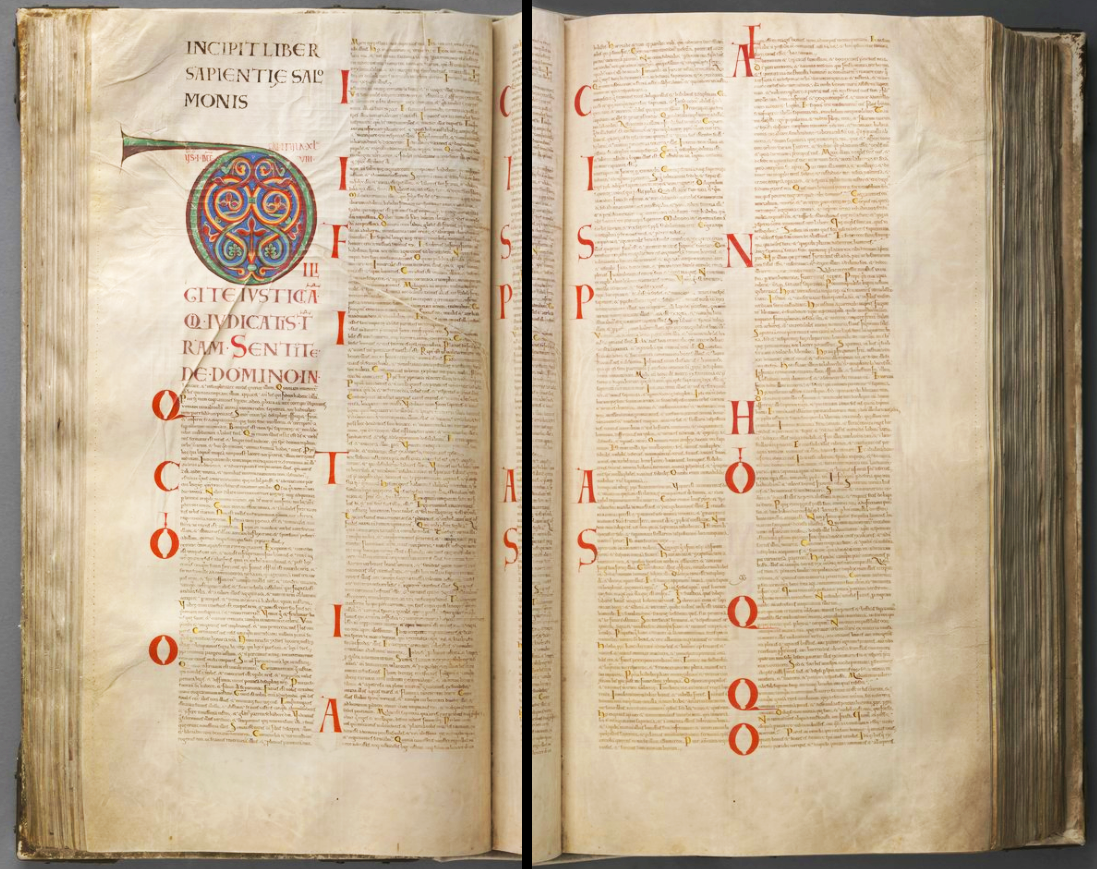 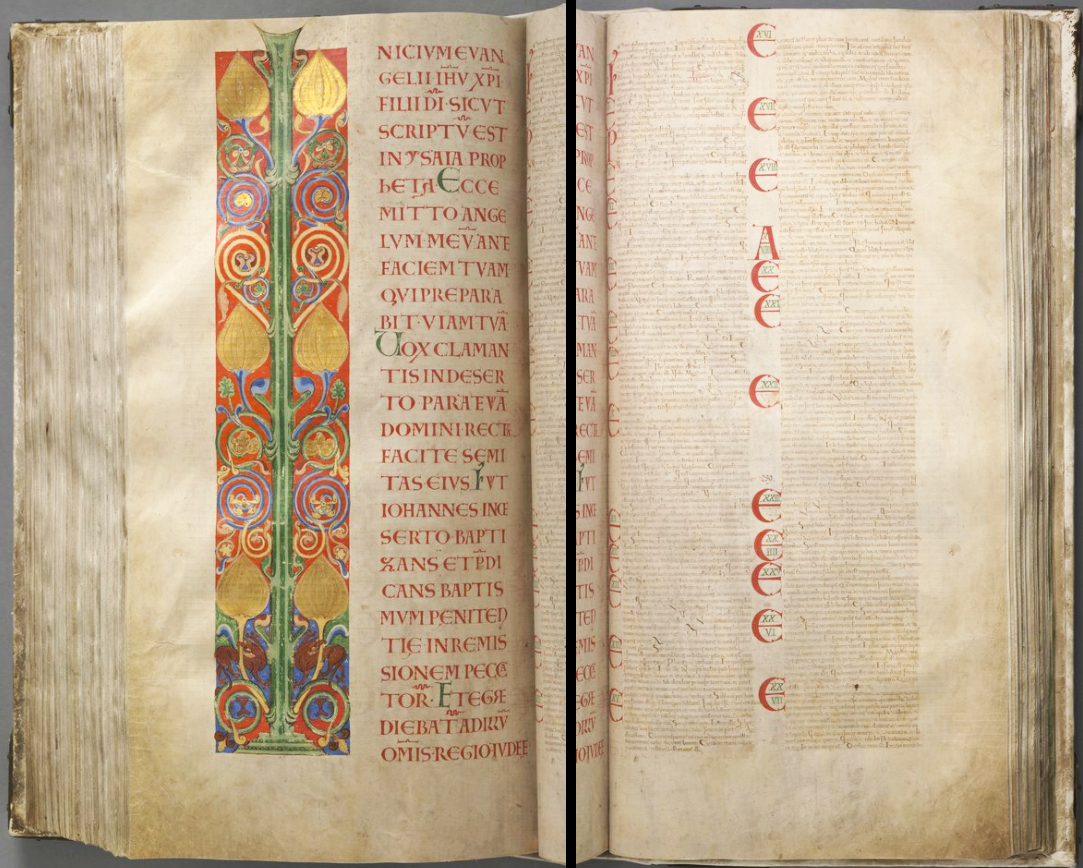 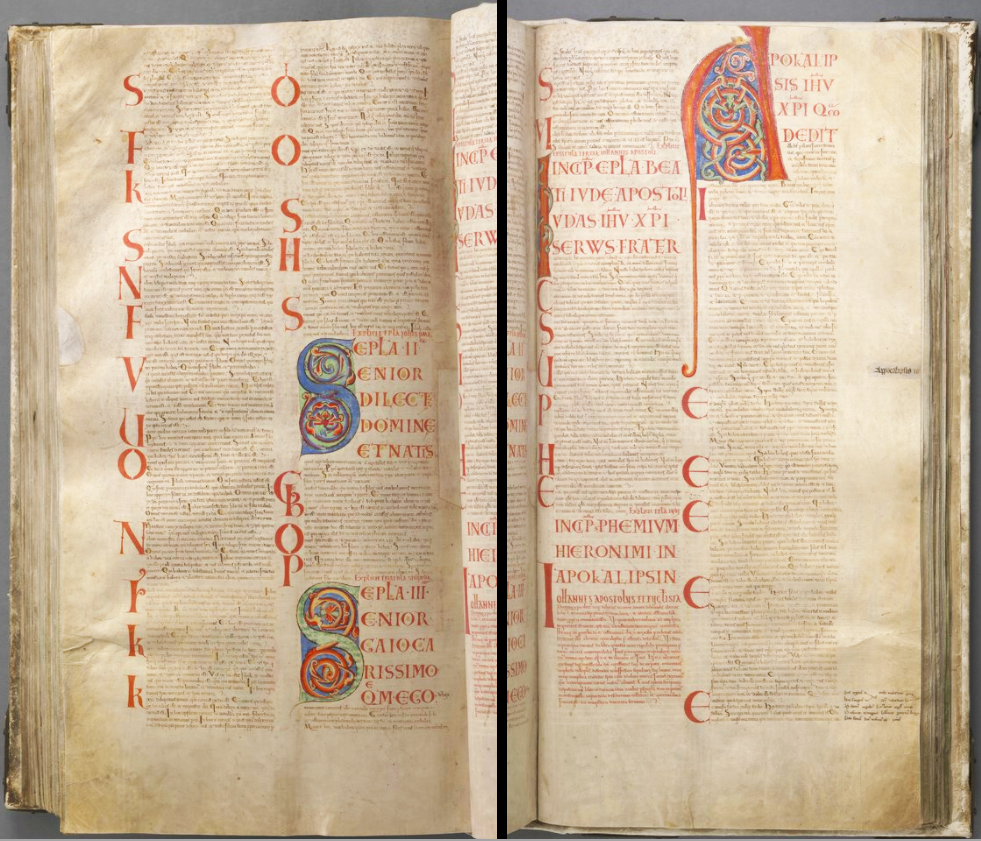 All of the illuminations in the Codex Gigas depict geometrical shapes or images of plants except for this cute little squirrel on page 110. 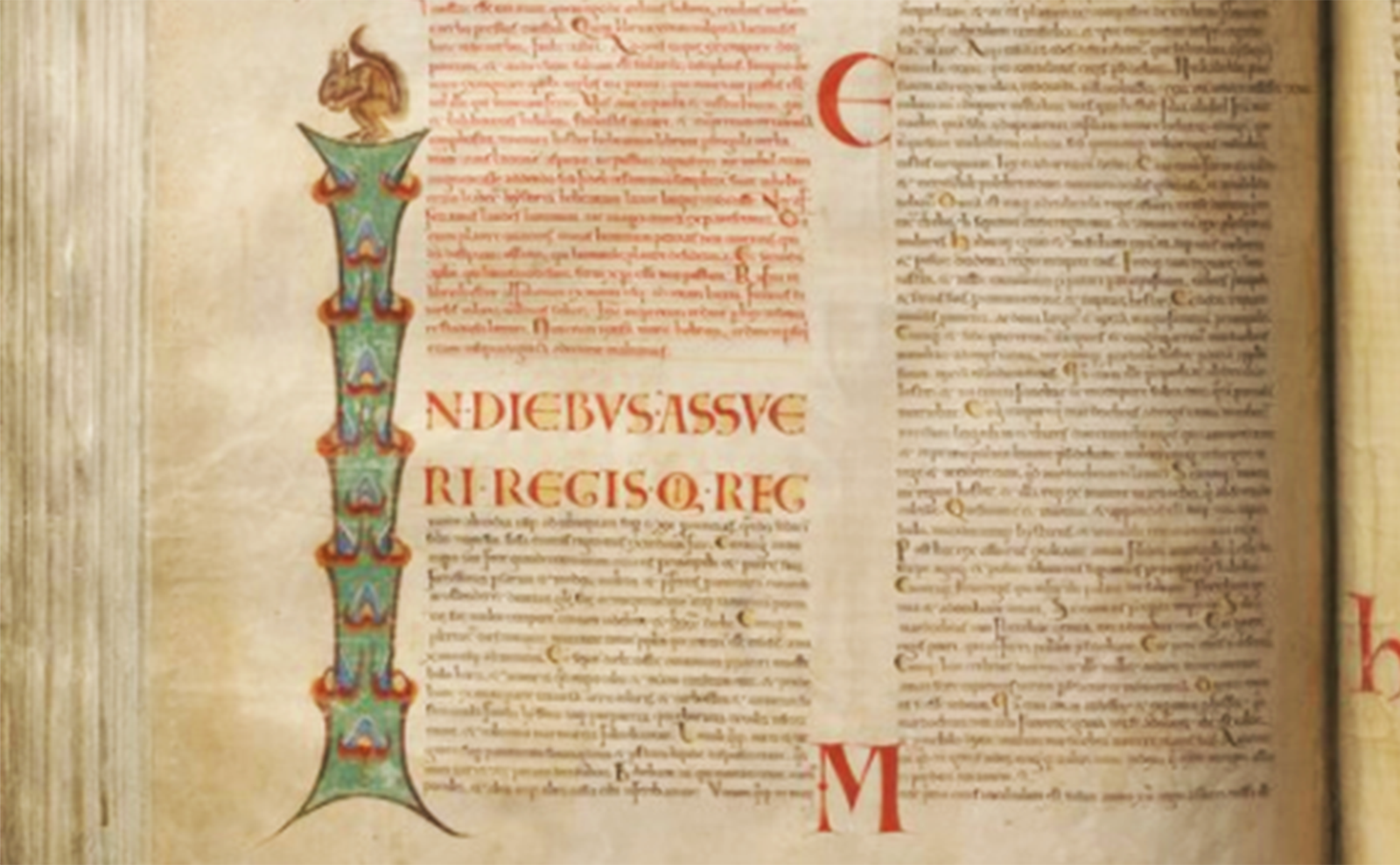 Legends of the Devil’s Bible

There are several tall tales associated with the Codex Gigas. Here are two for your amusement:

Visit the Codex Gigas at Home

The Codex Gigas is housed in the National Library of Sweden, where you’ll also find a light-infused reading room that anyone is welcome to use for reading, studying, computer work, or daydreaming. There’s a cozy café in the lobby that serves excellent tea and coffee and offers the exact right level of people-murmur as background noise, so you can make a day of it. 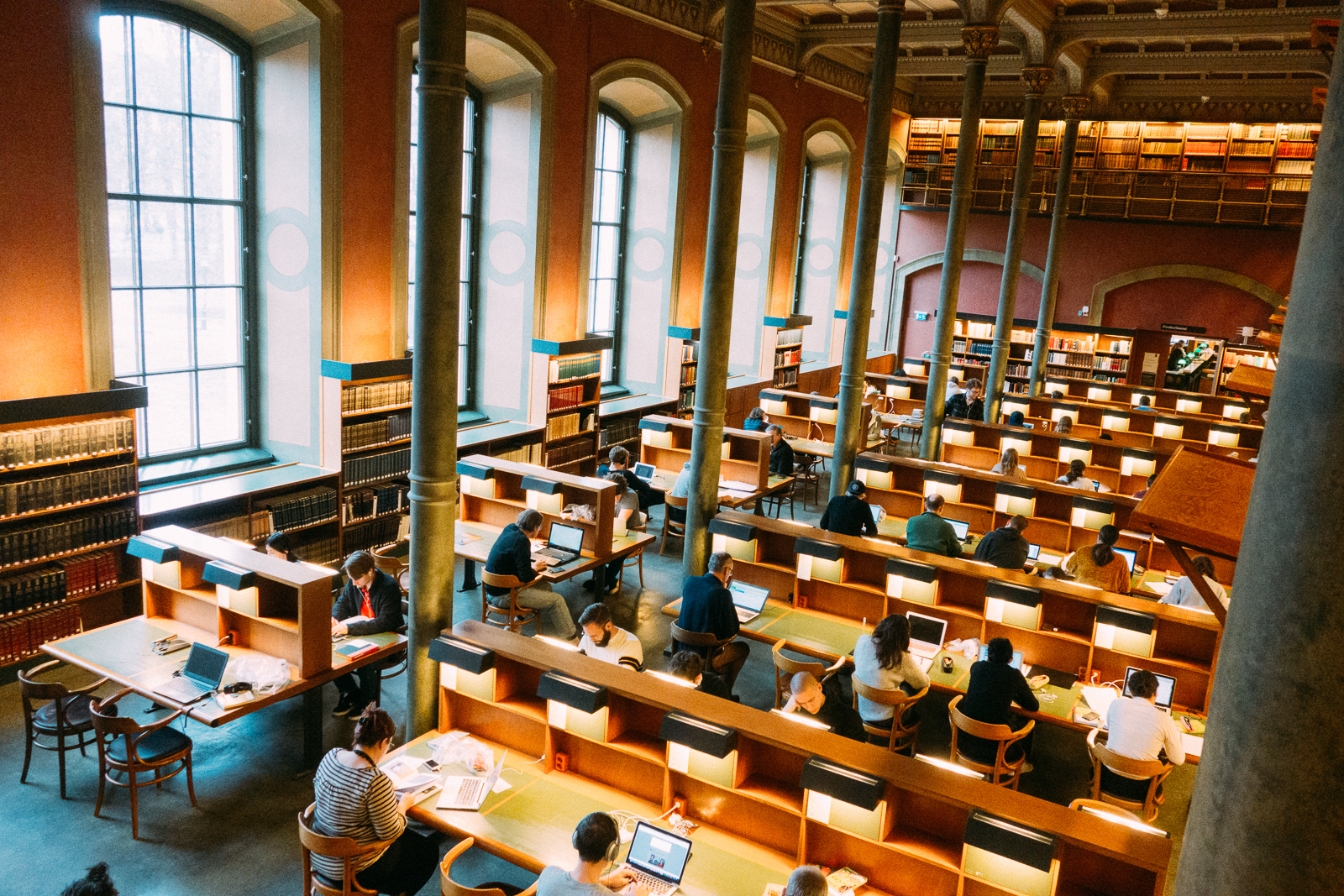 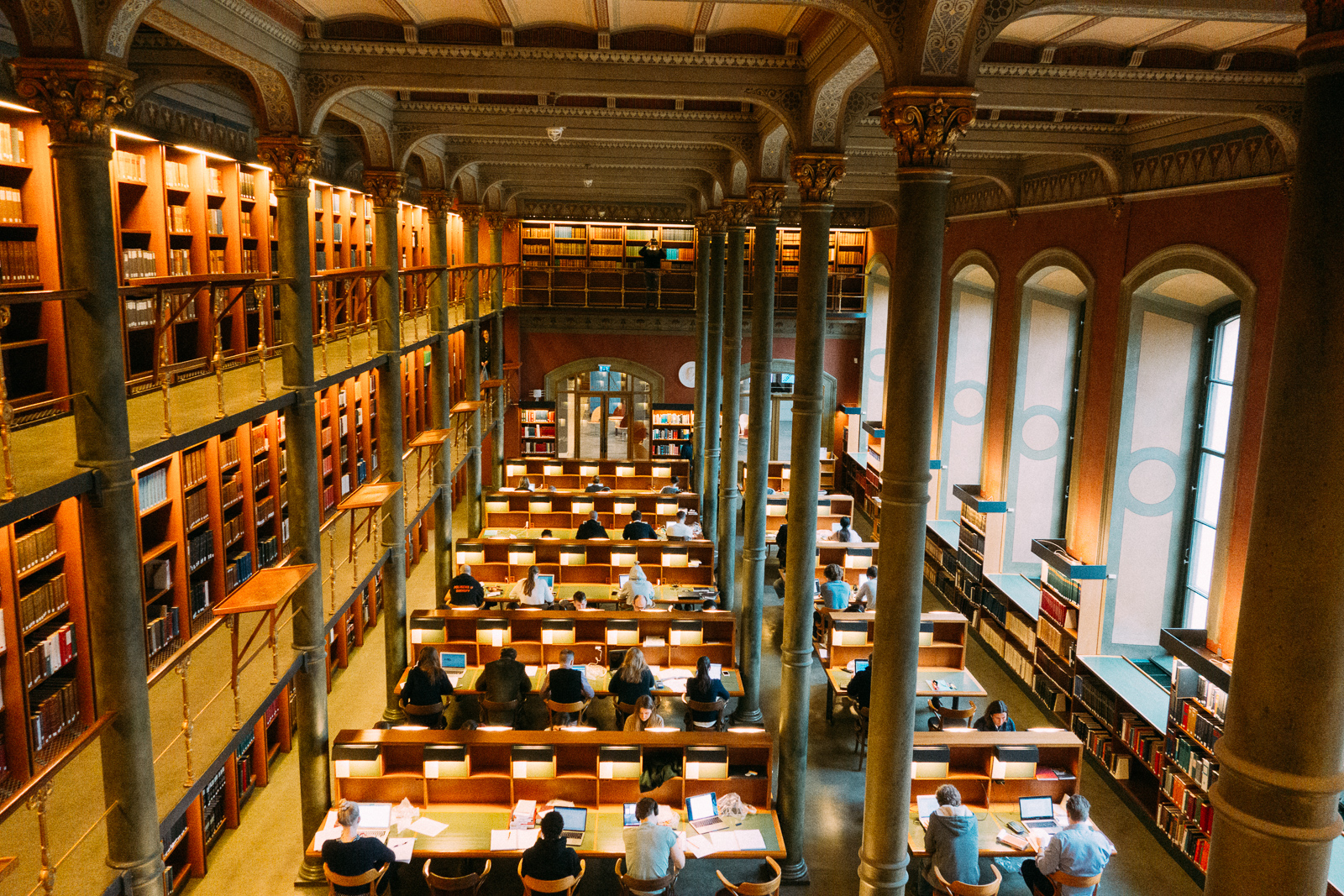 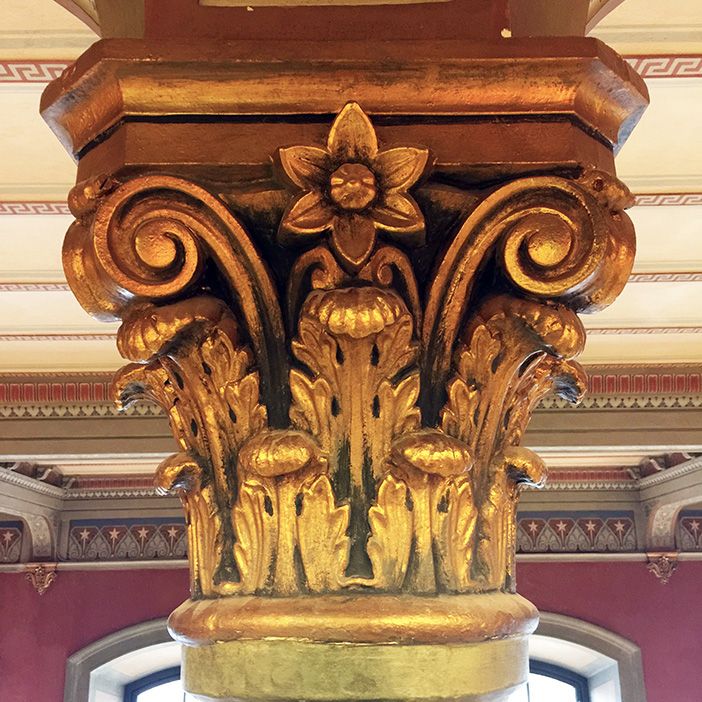 This encyclopedia of entertainment on the shelves of the reading room is filled with photos of Swedish and American movie stars from the early decades of the 20th century. 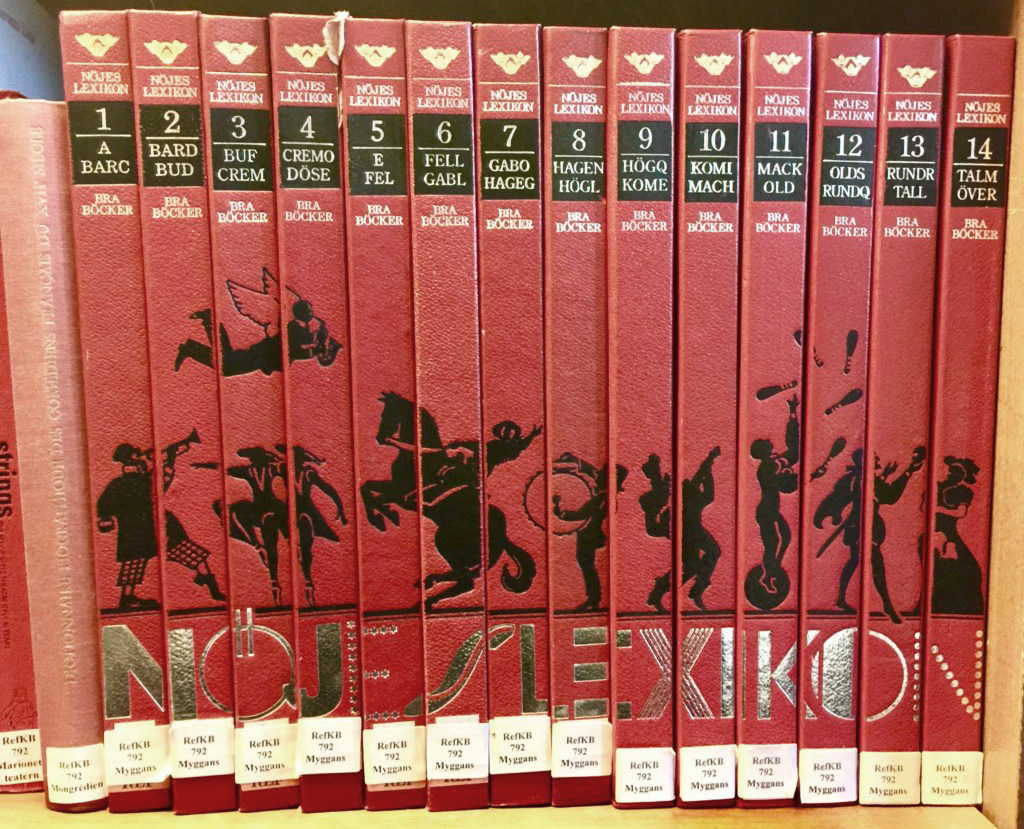 The library also features a scale model of the building which was designed by Swedish architect Gustaf Dahl and constructed between 1871 and 1877. 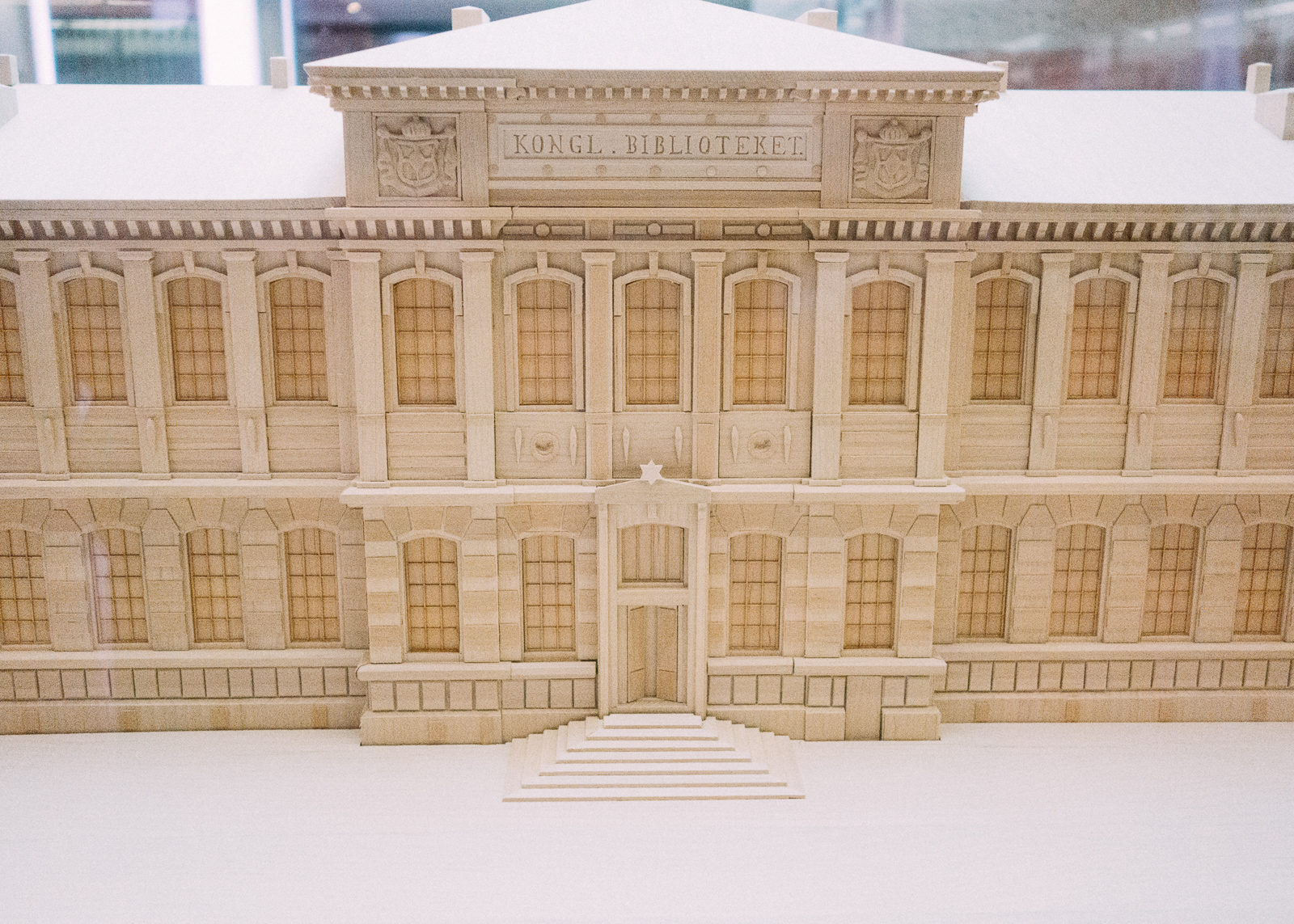 Fika is the leisurely consumption of carbs and caffeine that's a standard part of every day in Sweden. More than a coffee break, it's a pause to connect with people, recharge, and appreciate the good things in life.