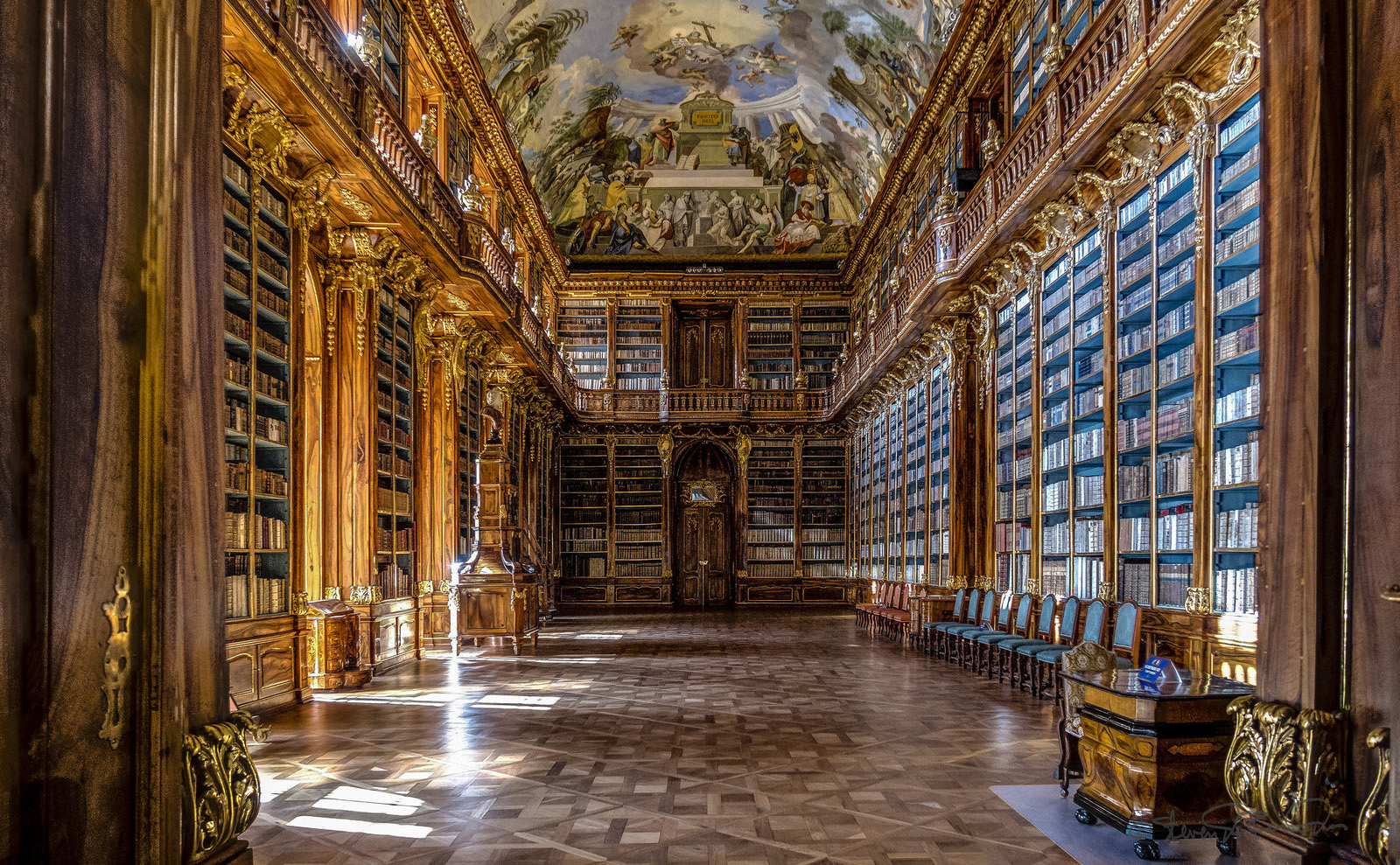 The Strahov Library is made up of the Theological Hall, the Philosophical Hall, and the Cabinet of Curiosities. It holds more than 200,000 volumes in its collection, including first printings of more than 1000 books on the subjects of religion, medicine, mathematics, law, philosophy, astronomy, and geography — mostly in Latin, of course.

The library is located within the complex of the Strahov monastery, a Premonstratensian abbey on top of the hill behind Prague Castle. Those Premonstratensians were known for being very solemn, and that’s by 12th-century religious standards, so, yes: quite serious.

But in the late 17th century, the new abbot got behind the idea of an updated library, and he built the Theological Hall. Its curved ceiling is decorated with baroque stucco and paintings depicting the theme of wisdom, along with the Latin words initio sapientiae timor domini (‘the beginning of wisdom is the fear of God’). This room is infused with fresh, white light, perhaps sweeping the darkness of ignorance out of the corners and shadows.

In contrast, the Philosophical Hall (at the top of this post) is filled with warm light, reflecting a burnished glow from the floor-to-ceiling hand-carved walnut bookshelves and gilt trim. Built about 100 years after the Theological Hall, it’s the work of another new abbot who favored a Classical style. The two-story construction reaches toward heaven and the frescoed ceiling depicts mankind’s journey to wisdom. Be sure to look for the spiral staircases in the corners, as well as two secret passageways hidden by bookshelves and opened with fake books.

Don’t miss the dendrology library (a.k.a., xylotheque) in a wooden bookshelf on the right-hand side of the Cabinet of Curiosities hallway. These tree books are like miniature Ents — you halfway expect them to blink open their ancient eyes and tell you stories. Collected by Karel of Hinterlagen around 1825, these 68 volumes — really more like handcrafted boxes than books — each represent a different tree. The spines of each one are made of bark, sometimes including lichen, and the treasures inside include roots, branches, leaves, flowers, fruits, sections of branches, and even a bug or two. This is one of only two such collections in Europe; the other is at the Muséum National D’Histoire Naturelle in Paris.

We suggest you also take a moment to explore the goodies in the display case that houses dozens of truly-scary weapons, as well as a surprisingly long narwhal tusk that as originally believed to be the magical horn of a unicorn. Those long, brown, leathery things? Someone might tell you that they’re elephant trunks, but they’re really preserved whale penises. Much respect to the turn-of-the-century explorers who felt the need to document every aspect of the natural world.

The Strahov Library is located in the Strahov Monastery complex on the hill overlooking Prague, near Prague Castle.

Note: Visitors to the standard tour are not permitted to enter the libraries directly, but can view them from behind a velvet rope in the hallway; humidity from all the book-loving bodies was damaging the delicate frescoes. For a closer look, it’s possible to book a private tour that gets you into the library for 30 minutes of private gawking at gilded tomes; info is at the link above.

Double-note: There is a nominal charge for taking photographs. This is a historical library on the grounds of a monastery; please be gracious when paying or not paying the photography fee.